A dream race destination – clear blue, warm waters, cycling on a Grand Prix track and running along the water front. An expensive trip for most traveling triathletes but worth it for a hard, sweaty and unforgettable race.

After just 2 years this tri was described as ‘the most glamorous in the world’ and yes the course and setting helps but it’s also down to the meticulous organisation. The race isn’t cheap but you definitely feel like it’s worth it.

Most international racers check into the same hotel (Khalidiya Palace Rayhaan) so the staff are all geared to cater towards the bikes and big appetites of hundreds of triathletes.

The hotel is also incredible and there’s an artificial beach that many athletes make use of for training in the days leading up to the race.

A couple of days before the race there’s a big race briefing and gala dinner on a beach-side lawn. They give you all the information you need plus lots of advice for the race which puts most nervous triathletes at ease a bit.

Traveling triathletes are catered for in every sense with race briefings in the nights leading up to the race, bike workshops and even a practice swim the day before out on the swim course.

On the day an announcer whips up the excitement but also tells everyone what waves are going off when. There are also an excellent number of nutrition stations and stewards all along the run and even the bike.

You can’t get much better than this. Warm, crystal clear waters, a ride into the desert, laps of the Yas Marina F1 track then a run along the sea front in the shadow (not literally unfortunately!) of Abu Dhabi sky scrapers.

It’s a long course though. The Short course is the same as an olympic except that the bike is 100km instead of 40km and the long is double everything. The swim is an absolute pleasure. The waves are only made up of a few dozen  starters so it’s not too packed and the water is warm, clear and clean.

The bike takes you out along the coastal roads to a massive highway that stretches into the distance. it’s new, empty and smooth with a regular series of gentle slops as the road goes over rivers. It’s incredible to look up and see the sea on the left and the desert on the for miles around before you get to about halfway and get to Yas Marina. This is cycling at it’s most fun and iconic. If you’ve ever watched any F1 you’ll know this track with it’s bright blue corners and futuristic buildings. Then it’s all the way back to the transition then back out for a short loop to make up the distance.

The run takes you along the corniche and out to a temple in the bay then back again. It’s closed off to pedestrians and there’s sparkling blue waters all around that almost (!) make you forget the pain!

In the official race hotel the tension and excitement builds in the days leading up the race.

It’s even a little bit intimidating as the hard-core triathletes sit pool side tinkering with their bikes and munching 100s of bananas.

After the race briefing and practice swim you just want to get on with it and get out there so it’s great that it all starts very early. From dawn the tension and excitement builds with the pros kicking everything off to music and announcements from organisers. It’s a big tri with almost 1900 runners so there’s support wherever they can stand.

On the start line everyone is fired up, nervous and over the moon to be there and it stays like that throughout the race. The really serious guys can get a bit aggressive on the cycle and the no-drafting rules are stretched when the course is quiet but most people are there for a good, fast and fun race.

Out on the Yas Marina everyone has an absolute ball. Some cyclists even made F1 car noises as they went around…ahem.

How difficult is Abu Dhabi Triathlon? 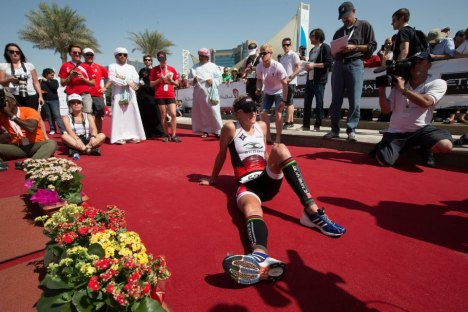 It’s hot. And long. The Short and Long courses are compared to Half Ironman/ Ironman distances with 100km and 200km bike courses.

There are also lots of hills that aren’t too steep but very long and energy sapping on the cycle. It can also get very windy and you don’t really notice how windy until you get some shelter out of the wind. That’s of course when the heat starts affecting you!

The run is flat but by the time you start pounding the promenade the mercury can rise up to 40 degrees but averages at just over 30. Agree with this for difficulty? Vote below in our poll.

What is there to do Après Race?

Sadly Abu Dhabi is a bit of building site with no real centre. So once the music stops at the finish line it’s mainly back to the hotels which may or may not serve you a celebratory cold one. There is a prize-giving from the organisers though which is a good excuse to exchange stories and show off your medals.Click here for Abu Dhabi tourism information. Recommended package tour operator: Sports Tours Iternational.

Other races by this organiser

On the way to and around the F1 track I was full of beans but on the way home I finished my jelly babies and biscuits and slowed right down towards the end. It took me 3hrs 33mins to make it home and by the time I started running I had nothing left.

But then the girlfriend shouted at me and I pushed it to finish under my 5hrs target.

Phew – ‘hell hath no fury like an embarrassed girlfriend’!