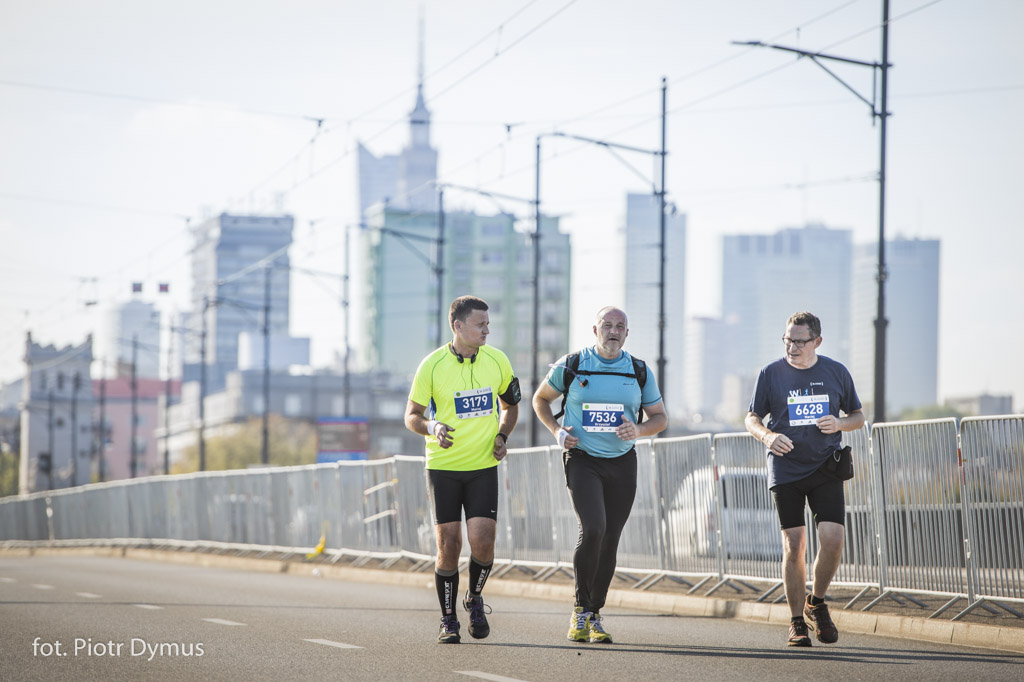 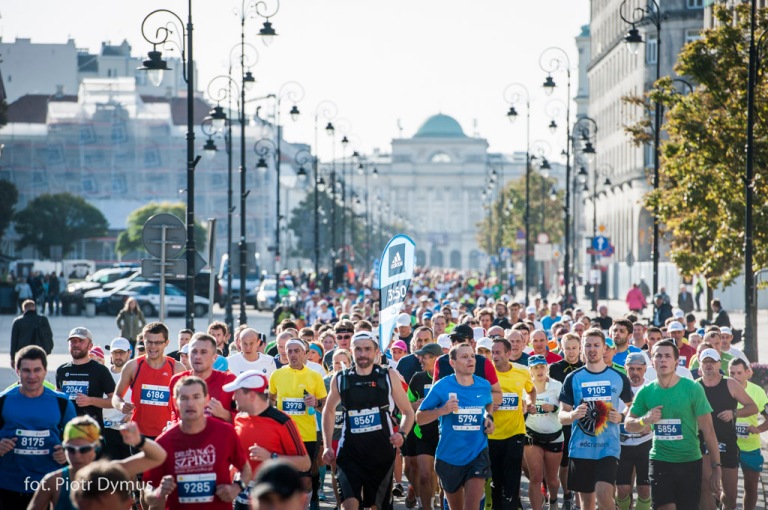 If you want to run a superbly organised fast flat marathon then Warsaw marathon is just the race for you. A festival atmosphere and completely hassle-free, this is a race that allows runners to focus entirely on their personal goals.

How was the organisation and set up? 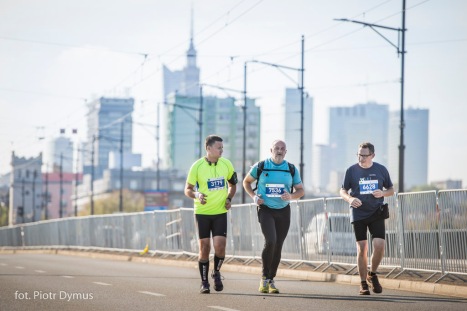 You can sign up to the Warsaw marathon on the organiser’s web site. The website is available in English. The entry fee is PLN100 (equivalent to approximately GBP20) if you sign up in advance and increases the closer to the event up to PLN200 (GBP40).

If you make up your mind late, there is still the possibility to sign up on the day. Two days before the race you have to visit the race headquarters to pick up your race package, which contains your bib and timing chip, deposit bag, race t-shirt, race key ring, one gel and one bottle of isotonic drink from the sponsors.

The race information pack is provided in Polish and English.

For an additional fee of PLN70 (GBP14) you can also get a technical t-shirt by Adidas designed for the event. It’s a great t-shirt and there are different fits for men and women, which is a bonus as many races have unisex t-shirts which do t look great on girls!

The race headquarters are set up at the Warsaw national stadium which was built for the Euro 2012 games and at the same time there is a running fair including stalls from major running companies such as adidas, asics, brooks and many others.

Despite a large number of participants (around 10,000 people) the collection of the race packages is very well organised without any queues and the fair is a great chance to pick up the last essentials for the race.

The marathon starts at 9:00am on Sunday morning, the start line is on a bridge over the Vistula river next to the national stadium. The nearby roads are closed and the best way to get to the start line is by public transport which is free for all runners on the day. There are plenty of toilets provided with no more than 2 or 3 people waiting at any one time.The start is organised in zones depending on the predicted finish time. There are pace setters for predicted finish times too.

The course leads through the city centre at first, with all the roads closed for traffic, before heading to the south of the city and back to the centre.

The runners are taken on a tour of Warsaw’s major landmarks and tourists attractions. There are stunning views of the city at every corner, and beautiful sunny weather on the race day made it even more beautiful. 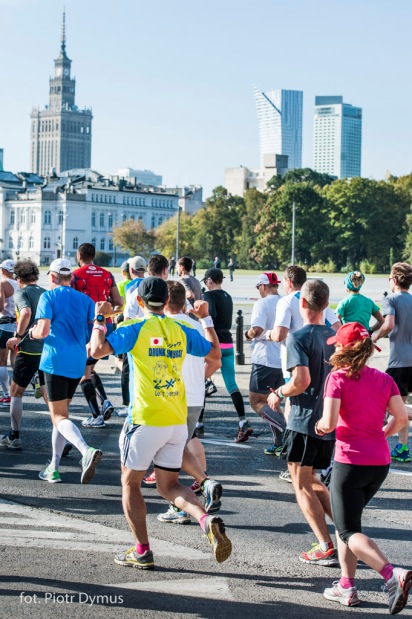 There are various bands from indie rock to Warsaw firemen orchestra spurring the runners on at every kilometre. There are timing mats every 5km as well as at half way point.

The race finishes inside the national stadium.  All runners receive a medal, water, isotonic drinks, thermal blanket, an apple and a hot meal. There is also a possibility to have a post race massage. The deposits, changing rooms and showers are available within the stadium.

How difficult is Warsaw Marathon?

The course is mostly very flat, which is ideal for those looking to run a fast marathon. So if you trained honestly you should have no problem finishing.

The race is advertised as such by the organisers:

“It is easy. There is only one climb between kilometers 25 and 26 but it is not very difficult. On the other hand, there are two declines – between kilometer 5 and 7 and then between kilometer 40 and 42. A very similar course in 2013 produced a 2:08 time of the winner (and he ran a solo race!) so what better proof do you need?

The cut off time is 6.5hrs, after which time a bus picks up the runners who do not manage to complete the run and the roads re-open. I saw the bus coming back to the stadium at the end and it was empty, which means all runners managed to finish the run.

What was the atmosphere like in the crowds and among the racers?

The atmosphere amongst the runners and the spectators was that of a party – everybody was in great mood!

Lots of people lined the course and cheered on the runners. The running bibs displayed the runners names which allowed the spectators to cheer the runners on by their names, which made it more personal and helped to carry on running when your body just wanted to stop.

Finishing the race in the national stadium with is also a great experience, with all the spectators in the stands.

What is there to do Après Race?

As part of the event there are various other races, including hand bike marathon, 5km race and a relay, so there is something for everyone depending on their abilities.

After the race there are plenty of great new restaurants and bars in the centre of Warsaw to rest and recharge.

There is a beach right next to the national stadium which overlooks the west side of Warsaw and its a great place to relax on a deck chair while soaking up the autumn sun.

This was my first marathon so I approached it very cautiously making sure to pace myself well and ensuring I had enough energy to complete the race without hitting the wall.

My goal was to finish it below 4 hours, which I managed easily finishing the run in 3hours 46mins – I spent the rest of the day feeling over the moon and couldn’t stop smiling!

I will definitely do it again next year. This race is very special to me as it took me along the roads I walked for thousands of times when I lived in Warsaw, and I would had never thought back then I’d be running them one day.

It was an emotional journey for me, and I burst into tears (of happiness!) when I crossed the finish line. It was a perfect day for me.

Ps. I do recognise that doughnuts are not the most recommended post race nutrition source so please do not get inspired, I just haven’t had them for years and decided to reward my good run with one or two fresh doughnuts stuffed with plums which were just divine 🙂

One thought on “REVIEW: WARSAW MARATHON”